Rebuilding the American City is a recent book that highlights 15 urban design and planning projects in the United States that have been catalysts for their downtowns and were implemented during the tumultuous start of the 21st century—a period marked by renewed interest in cities but also by ongoing social, economic and environmental challenges. The book presents five paradigms for redevelopment and a range of perspectives on the complexities, strategies, successes and challenges inherent to rebuilding American cities today. 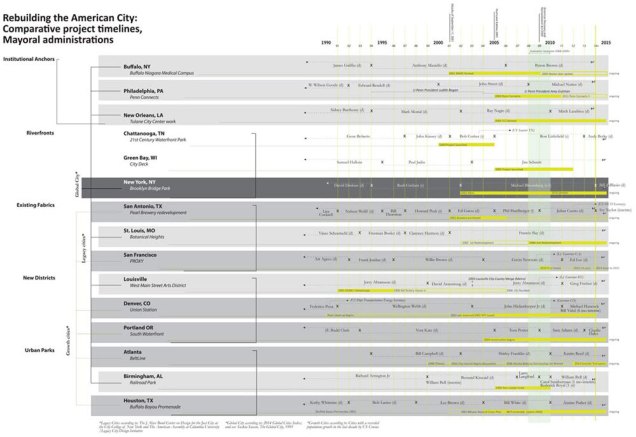 An example is the redevelopment of Buffalo, New York centering around the Buffalo Niagara Medical Campus.  The Buffalo Master Plan conceptualized a way to unify a number of burgeoning medical institutions under the umbrella “BNMC.” By concentrating development in the core of the campus and along a common spine, the BNMC alleviated institutional pressure on the seams it shared with its neighborhoods. The medical area’s new primary public space, a lush linear park, serves as a branding mechanism and seam stitching together the otherwise disparate buildings into a unified campus.